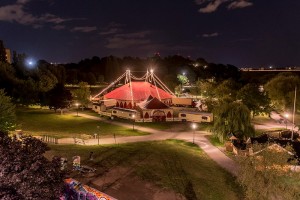 „Touring classical circus,“ is a living tradition and has been added to the National Inventory of intangible cultural heritage in Sweden. Thanks to the initiative by ECA Board members Carmen and Trolle Rhodin of Cirkus Brazil Jack, Sweden is the fourth country in Europe to acknowledge circus on its national list, following the Netherlands, Hungary and Finland. The Institute of language and folklore have the responsibility for this list in Sweden (www.isof.se). The Rhodins are now trying to achieve the same recognition also in Denmark and Norway, working closely together with other ECA member circuses in those countries. The Representative of the Federal Government for Culture and Media:
“First of all, I would like to inform you that our house sees the “circus arts” also in the sense of the word as a part of our cultural tradition and living presence. This includes that many circus acts are considered to have an artistic value. I also underline this point because we hear time and again that the Federal Government does not consider circus to have a cultural value.”

State government of North Rhine-Westphalia:
“According to the corona protective decree (CoronaSchVO) of the state of North Rhine- Westphalia in the version valid since May 30, 2020 as well as in the modified version since June 15, 2020, the operation of circuses is not forbidden. Though circuses are not explicitly mentioned in the decree, they may restart their operation – as other cultural institutions, too – with restrictions, according to § 8.1 CoronaSchVO.”

State government of Lower Saxony:
“Unfortunately, I cannot give you any concrete date for a possible reopening of circus companies. According to § 1.3.2 of Lower Saxony’s decree about infection control measures against the spreading of the coronavirus, theatres, operas, concert halls, cultural centres and similar institutions, thus including circuses, are closed for public and visitors, independent from the respective operators and proprietors.”

Minister President Haseloff (Thuringia):
“This is missing, this culture that has had such an influence in Europe over the centuries. We must not lose it.”

Please feel free to use these quotes wherever that may be applicable, but, please, mention the source European Circus Association.

Special support for circus in Hungary

Péter Fekete, Minister of State for Culture in Hungary and a member oft he ECA Executive Board, informed us that Hungary outstandingly has introduced a financial care package for Hungarian travelling circuses, independent artists and artists working with animals. The exact amount financed by the Ministry of Human Capacities adds up to EUR 300.000 aiding circus arts, EUR 80.000 aiding independent circus artists, EUR 150.000 aiding travelling circuses and EUR 10.000 aiding contemporary circuses. Moreover, an additional sum of EUR 70.000 were spent on animal welfare and feed.
These days travelling circuses are already carrying out their premiers and Péter Fekete is trying his best to attend each and every opening show in cities all over Hungary.
The director of the Capital Circus of Budapest, dr. Beáta Borsós, together with the circus professional manager, József Graeser “Dodi”, has used the past period, caused by the unfortunate kick-in of the pandemic, to renovate and issue maintenance work all around the building of the Capital Circus of Budapest. They have provided accommodation, board, and rehearsal space free of charge for all the artists, who were stuck in Hungary due to the travel restrictions. Furthermore, it is exemplary how they took care (of the feed) of the Russian animals, that also had to stay in Budapest longer than planned, due to the pandemic.
In the meantime, the emergency state has been lifted off of Hungary. Travelling circuses are already on their ways and the Capital Circus of Budapest is preparing and rehearsing its brand-new summer show, Fairy Dance – Woman Magic, premiering 18th July.

Germany supports the circus with € 5 million

On initiative of the European Circus Association, € 5 million have been reserved for the circus industry as part of the aid programme “New Start Culture” of the representative of the Federal Government for Culture and Media. From August 31, 2020 on, circuses can submit applications for “investments caused by the pandemic”. The application procedure ends when all financial means have been granted, but not later than on October 31, 2020. The funding amount per application lies between € 5,000 and 100,000. The Bundesarbeitsgemeinschaft Zirkuspädagogik e.V. is in charge of the administration and forwarding of these funds. The support is aimed at all circuses, traditional companies as well as circus pedagogical institutions, circus schools and projects of the so-called contemporary circus to enable them to reopen or to realize hygienic concepts / social distancing regulations due to the pandemic. Among those pandemic-related investments are protective installations, online ticket systems, the modernization of air conditioning, another audience management and seating, sanitary installations etc.

The lockdown period for circuses has begun at the end of February 2020 in several regions and at the beginning of March in whole Italy. Ente Nazionale Circhi contacted immediately the National Civil Protection Service (Protezione Civile, part of Ministry for Interior Affair) reporting the location of every circus in the territory (about 50) , the list of animals and the specific needs of each one. Going through the local department of Civil protection Service the circuses were supported for the basic needs. Other supports arrived from farmers associations and above all from C.E.I. (Conferenza Episcopale Italiana – Italian Episcopal Conference) and CARITAS.
Meanwhile, Ente Nazionale Circhi opened contacts with all national and local authorities to get the permission for all circuses to stay in the areas were they got stuck at the moment of lockdown declaration, without any payment or penalties. Ente Nazionale Circhi asked to the Government for a declaration of “state of crisis” for circus arts sector, the stop of all taxes payments, social supports for employees. Then, Ente Nazionale Circhi helped two circuses stuck in Greece and Tunis to get back in Italy.
The Ministry of Culture issued decrees to support live shows, circus included:

At the moment part of Italian circuses started touring again, some of them open air, other under tent but with restrictions by number of seats, distance, etc. The lockdown due to the Covid-19 pandemic and the practical ban for circuses and show folks has sparked protests in several countries. In Germany, more than 1,000 trucks of fairground people and circusses blocked the streets in Berlin. According to local police, about 1,600 people showed up to demand the freedom to do their jobs. In London, artists from several circuses came together on 7th July 2020 to deliver an open letter to Prime Minister Boris Johnson asking for more help and support. In both cities, also members of the European Circus Association were among the protesters.

Productores de Sonrisas, S.L., Spain, and Cirkus Arli, Denmark, have recently joined the European Circus Association, making our association even stronger than before. Also, two former members of the ECA have decided to join again after an absence for some years. Welcome back Cirkus Merano, Norway, and Circus Metropolitan Bucharest, Romania!

The voice of the circus. Together we can save the future of the circus. The European Circus Association (ECA) was established to promote circus arts and culture, thereby protecting this important part of our shared cultural heritage. ECA believes that circus is universal and an ever changing form of arts which offers a broad variety of expression. We believe that circus is one of the most popular forms of live entertainment. Initiated by the European Circus Association, the European Parliament adopted a resolution in 2005 recognizing the circus as a part of Europe’s culture.

You find here in "News" information about our latest newsletter

You find in Members documents (after log-in) new documents about the presentations from Monte Carlo.